From Homeless to Working on Capitol Hill

When Laurel Hilbert, who has been blind since birth, made up his mind that his next step in life was to move to the United States, his friends and family were skeptical. He had no contacts, spoke no English and had no money. A daunting start to what has turned out to be an extraordinary journey.

From Walking with a Stick to His First Guide Dog

Hilbert’s determination and resolve to get an education and change his life have led him from Syria to Los Angeles to New York to San Francisco and now to Washington, D.C.; and, from walking with a stick that was often broken by people stepping on it to learning to use a cane in mobility training to receiving his first guide dog from Guide Dogs of America. Since arriving in the U.S. in 2013, Hilbert has gone from being homeless to working on Capitol Hill as a legislative intern for California Senator Dianne Feinstein.

Once settled in Los Angeles, Hilbert enrolled in high school and started working with a mobility instructor to help him better navigate his new city. It was this instructor who suggested he consider getting a guide dog and told him about Guide Dogs of America. There was just one hitch, he was afraid of dogs. His instructor convinced Hilbert to “at least” take a tour of the school. With much resistance, Hilbert finally agreed under the condition that he would not have to interact with any of the dogs. He left having not only petted the dog but being led (with an guide dog instructor next to him) by a guide dog in harness. “It was exhilarating, but I still wasn’t sure about actually having a guide dog,” said Hilbert.

Three years and a move to New York City later, Hilbert felt settled enough in his life and work to apply to GDA. With the support of his employer to take the three weeks off he needed to spend at GDA, in January 2016 he joined and graduated from class 396.

Three Weeks of Training was Intensive and Emotional

“When the trainer brought Aero to my room, I remember feeling a little confused and a little afraid because I still didn’t have experience being around dogs,” explained Hilbert. “The three weeks of training was intensive and emotional. There were times it was all going well and there were other times that I felt frustrated and had difficulties. The trainers understood all of my emotions. We would have one-on-one conversations to talk through how I was feeling. They were incredible.”

After graduation, Hilbert and Aero returned to New York and set about learning how to live and work together.

“I knew Aero was keeping me safe on the busy Manhattan streets, but I didn’t know the extent until I was walking with a friend who started to point out obstacles ahead of Aero and me,” said Hilbert. “When you use a cane, you have to be 100 percent alert. There are days where you have barely made it through – it’s cold, it’s hot, you’re distracted, it was a long day – but you have to be focused. With Aero, I still have to be alert, but I know I can count on him. He is an exceptional dog and I am so grateful to GDA for this amazing gift they have given me.”

The team had been back in New York for a while, when Hilbert decided to make a move back to the West Coast to San Francisco to attend college. At first, he worked remotely for the company he had been with in New York, but scheduling conflicts made it difficult to continue.

Once again, he found himself in an unstable financial situation and facing homelessness. He had a chance meeting with a local politician and longtime advocate for San Francisco’s homeless population, who worked with an agency for homeless youth, and secured a place for Hilbert to live for up to two years. 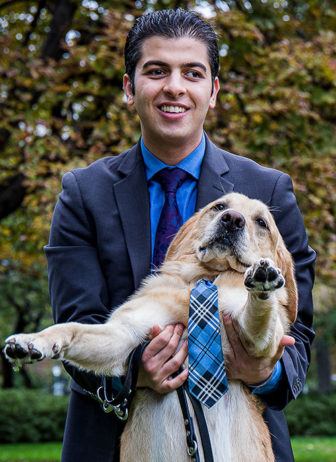 As a way to pay forward this kindness and hoping to help other youth who, like him, have experienced the insecurity of homelessness and living in shelters, Hilbert founded a nonprofit. Through his organization, Hilbert’s mission is to “promote the dignity of individuals who are not respected or are humiliated” due to their homelessness.

Hilbert, who always has had political aspirations, turned to his politician friend for help in securing an internship in Washington, DC. His friend, who now sits on the board of Hilbert’s nonprofit, secured several introductions for him. Hilbert wasted no time reaching out and scheduling interviews. His third interview was with the office of Senator Feinstein and it proved to be the charm. Within a few hours of the meeting, Hilbert was offered the internship.

Senator Feinstein, whom Hilbert had the opportunity to speak to at her birthday celebration, took great interest in both Hilbert and Aero. Hilbert shared with her his story, including how he had come to be an intern in her office and his future political goals.

“She asked me questions about my life and then asked to know more about Aero and his training,” said Hilbert, “I was very proud to explain that he came from Guide Dogs of America and what is involved with the training, and how they go about matching the dogs to the students to create a team like Aero and me. Since that day she has invited me to many more meetings, and she stops by to say hello to Aero every morning.”

Hilbert is now 23 years old and his ten-year plan is to run for Senate when he is 33 years old. He and Aero already are forging a path toward reaching that goal.