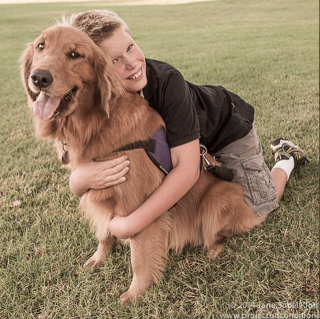 The Tingums and Ruby passed their Certification Test today and have graduated from TLCAD as an Autism Service Dog!

I want to thank those who made this possible. Fernande and Marshall Robinson took Ruby in at a young age and began her training. Dearing English assisted with the Foundation Training and Ruby was then transferred to Linda Chandler for the customized cues. It was the team work and help of Stephanie Myung in the placement process that made this a smooth and very successful placement. Ruby even found Garrett in BuyBuy Babies, a new store next to Target in Encinitas, as he hid in the back of a large shelf out of sight – when she was asked to find Garrett, who repeatedly elopes when out in public.

Garrett is leashed to Ruby’s vest and holds the handle on Ruby’s vest when in public in order to move forward, which has prevented his running off and the need to chase and catch him to keep him out of danger. During the testing, Ruby automatically ‘stayed’ to stop Garrett from running off when he was enticed by an object or the need to escape a ‘trigger’ that over saturates his sensory system. Caroline Tingum stated today that she would never be out in public with all her children by herself previously, and would not consider it any differently now since it works so well with Ruby.

The Tingum family are wonderful advocates for TLCAD for the public to see what an Autism Service Dog can do to open a family’s life and to be able to function as a family unit together in public. This is what keeps the TLCAD trainers going – to see the invaluable gift that was given today.

About Town Magazines Fall issue has done an article on Tender Loving Canines Assistance Dogs called “Loving Canines: Helping people with special needs become an active part of the world around them” by Clair Yezbak Fadden.