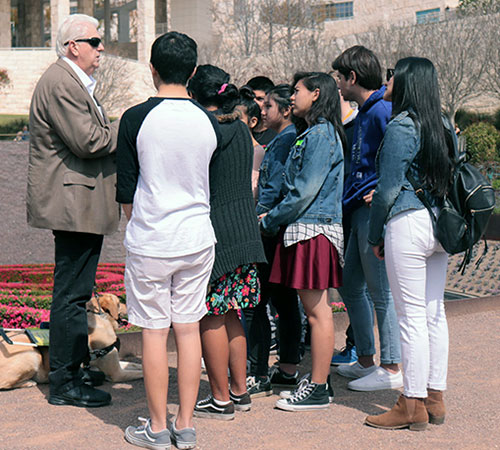 Tom Olzak was first introduced to Guide Dogs of America (GDA) at a California Council for the Blind convention in 2004. It was there that a GDA instructor offered Tom to take one of our guide dogs for a test drive. Tom excitedly picked up the harness handle and took his first few steps with some four-legged eyes. Before he knew it, he was flying down the sidewalk with a guide appropriately named “Flight.” It was during his walk with Flight that Tom recognized a sensation he had not felt in years, wind across his face. Using a white cane in recent years had caused Tom’s pace to slow down. He also was constantly looking at the ground to orient himself. His walk with Flight was the first time in years he could finally “feel the wind” across his face, he says. As he finished his first walk, he jokingly turned to one of his buddies and shouted, “Call my wife and tell her I’ll see her in 21 days. I’m going to GDA.”

Shortly thereafter Tom submitted his application to GDA. He was swiftly accepted and came to stay on our campus. It was well into his second week of working with his new guide Wrigley when Tom and his new partner ventured out for their first “night walk.” Walking at night presents many challenges for visually impaired individuals that daytime travel does not. Any light perception or vision left is usually taken away by the darkness of night. Tom had not traveled at night alone since losing his vision and found the idea terrifying. Before he got ready to take his first steps in the dark, Tom kneeled down to talk to Wrigley and said, “How are we going to do this?” Wrigley’s look assured him, “We got this, partner. Nothing will happen to you on my watch. I promise.”

Thirteen years later – having logged thousands of miles and countless adventures – the day came to retire Wrigley and hang up his harness. Tom had made retirement plans for Wrigley to live out the good years he had left with a nice family. After a long goodbye, Tom went in for one last embrace with his best friend. Wrigley looked up at him again and seemed to say, “I kept my promise.”

Tom has since come back to GDA for his second guide dog Goliath, or as he calls him, “G.” “It seems like yesterday, but it has now been over two years since I was matched with G. Goliath has shown an unbelievable passion for having fun, but has taken on the initiative of keeping Wrigley’s promise,” Tom says.

In the two years Tom has been with Goliath, they have traveled more than 5,000 miles in the air, ridden the train and the tram, and sailed on boats. “T&G” volunteer during the day at Western Alliance University in the low vision department. They help people who are in the early stages of vision loss transition into blindness. Tom also holds a seat on our Guide Dogs of America Board of Directors.

When asked what makes GDA his guide dog school of choice, Tom offers these words, “I come from a military family and I often reference the Marines. The Marines say, ‘Once a Marine, always a Marine.’ Well, when you come to Guide Dogs of America, once you are GDA family, you are always GDA family.”

Inspired by Tom’s Story? Apply for a guide dog today!